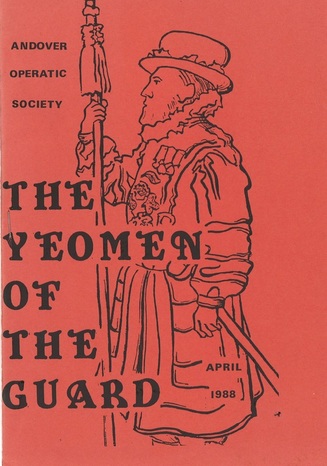 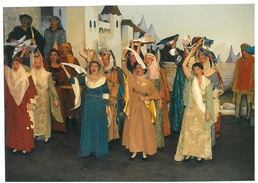 
Act I  Phoebe Meryll sits at the spinning wheel, sighing about the pain of love. Wilfred Shadbolt, the head jailer and assistant torturer at the Tower of London enters, and Phoebe mocks him, disgusted by his profession. Wilfred, who is in love with Phoebe, has noticed her interest in one of the prisoners at the Tower, Colonel Fairfax. He gleefully conveys the news that Fairfax is to be beheaded, for the crime of sorcery, that very day. Phoebe replies that Fairfax is merely a scientist and alchemist (and a handsome one at that) and leaves Wilfred to suffer from his love for her. The citizens and Yeomen arrive, singing of the Yeomen's bravery and valiant deeds. Dame Carruthers, the housekeeper of the Tower, dismisses protestations by Phoebe of Fairfax's innocence and, vexed by Phoebe's criticism of the Tower, sings its praises. After everyone leaves, Phoebe is joined by her father, Sergeant Meryll, who reports that her brother Leonard has been appointed a Yeoman for his valour in battle. Leonard is on his way from Windsor, where the court sits, and may bring with him a reprieve for the Colonel. Leonard Meryll enters bearing a dispatch for the Lieutenant of the Tower but no reprieve. Sergeant Meryll is eager to save Fairfax, for the Colonel served with him in battle and twice saved Sergeant Meryll's life. He hatches a plan: Leonard will hide away and Fairfax, sprung from his cell, will assume Leonard's guise. Phoebe is charged with getting the key to Fairfax's cell from the lovesick jailer, Wilfred.

Fairfax enters under guard by an escort of Yeomen. Sir Richard Cholmondeley, the Lieutenant of the Tower, sees him and greets him sadly, as they are old friends. Fairfax bears his impending execution bravely and philosophically, prompting tears from Phoebe and even Sergeant Meryll. Fairfax asks a boon of the Lieutenant: the charge of sorcery was the doing of his wicked cousin Sir Clarence Poltwhistle, a Secretary of State, who will inherit his estate if he dies unmarried. He therefore wishes to be married by his confessor to any available woman, it matters not whom, who will receive a hundred crowns for her hour of matrimony. The Lieutenant agrees and leaves.

Jack Point, a jester, and Elsie Maynard, a young singer, are pursued by a rowdy crowd that demands merriment and threatens the two strolling players. Elsie, objecting to a man's rude attentions, boxes his ears, which gives Point a moment to quieten and amuse the crowd. The two entertainers offer to perform the song of The Merryman and his Maid: it tells of a lovelorn merryman who is jilted by a maiden in favour of an arrogant lord, but the latter rejects her, and she returns on her knees to the merryman to beg for his love, and all ends happily. The song over, the crowd grows unruly again, and violence is averted only by the Lieutenant's arrival. Point and Elsie introduce themselves and explain that Elsie's mother Bridget is very ill and they seek money to buy medicine for her. The Lieutenant offers Elsie a chance to earn a hundred crowns (a very substantial sum) by marrying a condemned gentleman immediately. Point, who intends to marry Elsie someday, is assured that the groom will be beheaded directly after the ceremony. Elsie consents and is blindfolded and led off by Wilfred for the secret ceremony. The Lieutenant tells Point that he has a vacancy for a jester, and Point tells him of his skills and tries out some jokes. The Lieutenant leads Point off to discuss the employment further.

Wilfred leads Elsie back from her anonymous meeting with the priest and the prisoner and leaves her to reflect on her impending widowhood. Meanwhile, Wilfred wonders what they were up to in Fairfax's cell. Phoebe arrives and seductively distracts him as she steals his keys, which she gives surreptitiously to her father, who goes to free Fairfax from his cell. She keeps Wilfred busy until her father returns the keys, which she returns to Wilfred's belt, and leaves the confused and hopeful jailer to his fantasies of marrying her. Meryll disguises Fairfax as his son Leonard.

The Yeomen come to greet "Leonard", who insists that the tales of his bravery are exaggerated. He flounders when Phoebe greets him, not having been introduced to her, but Wilfred helpfully identifies her, telling Fairfax (with a strong dose of wishful thinking) that he, Wilfred, is betrothed to Phoebe. He commends her to the care of her "brother" until the marriage. The headsman enters, and all is ready for the execution. Wilfred, Fairfax (still disguised as Leonard) and two Yeomen go to fetch Fairfax. The Yeomen return and Fairfax announces his own disappearance. The Lieutenant blames the jailer, Wilfred, and declares his life forfeit instead. Wilfred protests his innocence and all wonder – not all honestly – how the prisoner could have escaped. Point is distraught at the escape of Elsie's husband, and Elsie faints into Fairfax's arms, as all rush off to hunt for Fairfax.

Act II
Two days have passed, and the Yeomen continue searching in vain for the escaped prisoner. Dame Carruthers enters with her niece Kate and berates the Yeomen for letting Fairfax escape. Jack Point (now employed by the Lieutenant), sits brushing up on his jests and bitterly reflecting on his profession, when Wilfred comes by. Point taunts the failed jailer, and Wilfred says he'd rather be a jester. This gives Point an idea. He reveals the secret wedding and agrees to teach the oaf the art of jesting if Wilfred will publicly swear that Wilfred shot Fairfax dead as he swam across the river to escape. Wilfred agrees to swear to this lie.


"Strange Adventure, Maiden Wedded"
Meanwhile Fairfax, still disguised as Leonard Meryll, laments his hurried marriage to a bride he cannot identify, for her face was concealed by the blindfold. Sergeant Meryll says that Elsie, the girl who fainted at the execution, and who has been placed in Meryll's charge, has recovered, but that her illness gave Dame Carruthers an excuse to take up quarters in his house while she nursed the girl. He has spurned the old woman's obvious overtures for years. Carruthers then happens by, together with her niece Kate, and notes that the latter heard Elsie talking in her sleep about her secret wedding. The other three leave Fairfax alone, pleased to find that his mystery wife is the fair Elsie. He decides to test her loyalty by pretending to woo his own wife, still disguised as Leonard. She rejects "Leonard's" overtures, as a married woman should, and he is about to reveal himself to her.

Just then, a shot is heard from the wharf and everyone enters. Wilfred, with the jester's corroboration, declares that he struggled with someone creeping about, discovered it was Colonel Fairfax, who dove into the river, and seizing an arquebus, Wilfred shot him dead. The Lieutenant orders the Yeomen to search for the body, and Wilfred is celebrated as a hero. Elsie, Fairfax, Phoebe and Point are left alone, and Point asks Elsie, as she is now free, to marry him. Fairfax, still disguised as "Leonard", tells Point that he doesn't know how to woo (it is not to be done in the manner of a jester!), and he undertakes to instruct Point in this art, following this up with a most effective demonstration on Elsie. Point, slow to see that Fairfax is wooing the girl for himself (and that Elsie has fallen for the heroic "Leonard"), finally protests. Fairfax tells Point that he has shown him how to woo and that he should apply the teachings "elsewhere". Phoebe, seeing her adored Fairfax pledged to another, bursts into tears, while Point, shocked by the turn of events, wishes he was dead.

Wilfred sees Phoebe weeping and she, rendered incautious by anger and hurt, and by her scorn for the jailer, inadvertently reveals that "Leonard" is in fact Fairfax. Realizing the game is up, she desperately buys Wilfred's silence by agreeing to marry him (after a long engagement). The real Leonard then returns and announces that Fairfax's reprieve has finally arrived. Sergeant Meryll enters, followed surreptitiously by Dame Carruthers. Phoebe tells him of her folly and goes with Wilfred, whereupon Dame Carruthers reveals herself to Meryll and threatens to expose the three schemers who had freed Fairfax illegally. He resignedly buys her silence with his offer of marriage.

Elsie arrives joyfully for her wedding to the man she still knows as "Leonard", but the Lieutenant arrives and announces that her husband Fairfax lives. Fairfax arrives dressed for the wedding, but Elsie, distraught over the loss of "Leonard", does not turn to see his face. He teases his wife, keeping up the pretence for another minute. Elsie begs for his mercy, to free her to go to her love, "Leonard", but he says that his heart is like a "massive rock" and claims her as his bride. Finally Elsie turns to see his face, and finally recognises him as her adored one. All once again erupt into joy, except the broken-hearted Jack Point. Tearfully, he reprises the song that he had earlier sung with Elsie, The Merryman and his Maid, with wrenching sorrow. Elsie "drops a tear" for Point, but turns back to her love. As the chorus turns away to celebrate the marriage of Fairfax and Elsie, Point falls insensible at their feet.


Gentleman of the Chorus 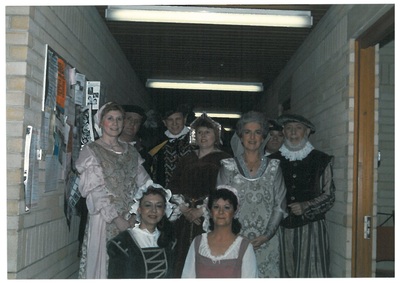 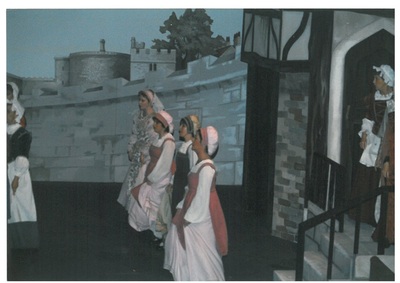 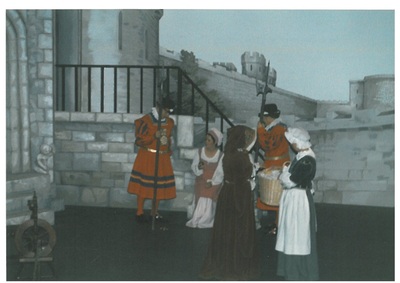 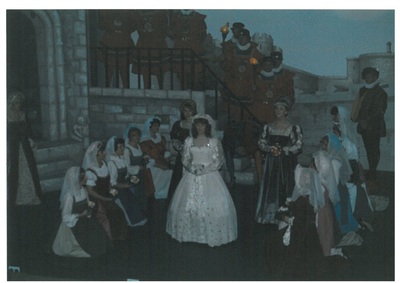 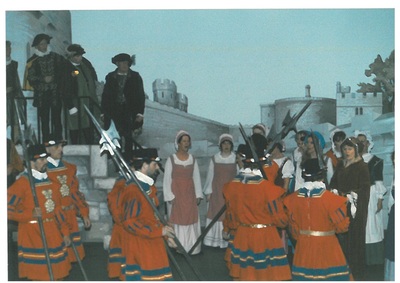