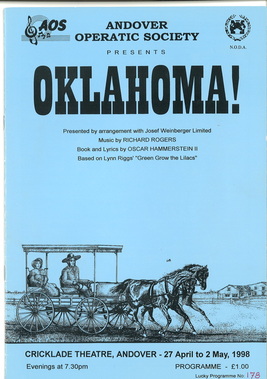 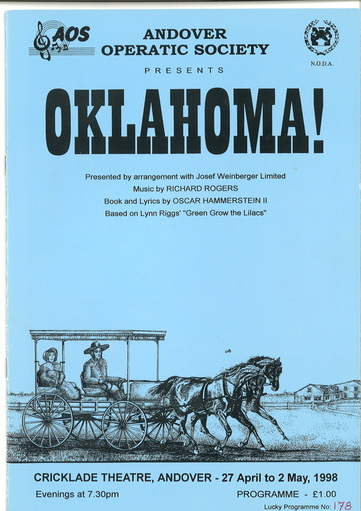 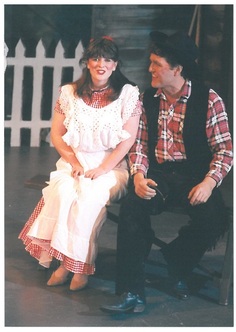 
In Oklahoma territory in 1906, cowboy Curly McLain looks forward to the beautiful day ahead as he wanders into farm girl Laurey Williams's yard ("Oh, What a Beautiful Mornin'"). He and Laurey tease each other, while Laurey's Aunt Eller looks on. There will be a box social dance that night, which includes an auction of lunch baskets prepared by the local girls to raise funds for a schoolhouse. The man who wins each basket will eat the lunch with the girl who prepared it. Curly asks Laurey to go with him, but she refuses, feeling that Curly had waited too long. He attempts to persuade her by telling her that he will take her in the finest carriage money can buy ("The Surrey with the Fringe on Top"), but she teases him about it until he says he made it up to get back at her. Laurey flounces off, not realizing that Curly really has rented such a rig.

The lonely, disturbed farm hand Jud Fry has become obsessed with Laurey and asks her to the dance. She accepts to spite Curly, although she is afraid of Jud. Meanwhile, cowboy Will Parker returns bedazzled and souvenir-laden from a trip to modern Kansas City ("Kansas City"). He won $50 at the fair, which, according to his girlfriend Ado Annie's father, Andrew Carnes, is the money he needs to marry Ado Annie. Unfortunately, he spent all the money on gifts for her. Will also purchased a "Little Wonder" (a metal tube used for looking at pictures, but with a hidden blade inside) for Ado Annie's father, unaware of its deadly secret. Later, Ado Annie confesses to Laurey that while Will has been away, she has been spending a lot of time with Ali Hakim, a Persian peddler. Laurey tells her she'll have to choose between them, but Ado Annie insists she loves them both ("I Cain't Say No"). Laurey and her friends prepare for the social, while Gertie Cummings flirts with Curly (her obnoxious laugh floating in to taunt Laurey). Laurey tells her friends that she doesn't really care about Curly ("Many a New Day").

Andrew Carnes discovers Annie with Ali Hakim. After questioning Ado Annie about their relationship, he forces Hakim at gunpoint to agree to marry her. Hakim and the other men lament the unfairness of the situation ("It's a Scandal! It's a Outrage!"). Curly discovers that Laurey is going to the box social with Jud and tries to convince her to go with him instead. Afraid to tell Jud she won't go with him, Laurey tries to convince Curly (and herself) that she does not love him ("People Will Say We're in Love"). Hurt by her refusal, Curly goes to the smokehouse where Jud lives to talk with him. Curly suggests that since Jud does not feel appreciated, he could hang himself, and everyone would realize how much they care about him ("Pore Jud Is Daid"). Their talk turns into an ominous confrontation about Laurey. After Curly leaves, Jud's resolve to win Laurey becomes even stronger, and he vows to make her his bride ("Lonely Room").

Confused by her feelings for Curly and her fear of Jud, Laurey purchases a "magic potion" (referred to as smelling salts, but actually laudanum) from Ali Hakim, which the unscrupulous peddler guarantees will reveal her true love. She muses on leaving her dreams of love behind and joining the man she loves ("Out of My Dreams"), then falls asleep under the influence of the opiate ("Dream Sequence"). In an extended dream ballet sequence, Laurey first dreams of what marriage to Curly would be like. Her dream takes a nightmarish turn when Jud appears and kills Curly. She cannot escape him, confused by her desires. The dream makes her realize that Curly is the right man for her, but it is too late to change her mind about going to the dance with Jud; he has come for her, and they leave for the box social.

Act II  At the social, during an upbeat square dance ("The Farmer and the Cowman"), the rivalry between the local farmers and cowboys over fences and water rights has led to fighting, which Aunt Eller ends by firing a gun to silence everyone.   Laurey is upset when she sees Curly at the dance with Gertie. In an effort to rid himself of Ado Annie, Ali Hakim buys Will's souvenirs from Kansas City for $50. Jud also contributes to this by purchasing Will's Little Wonder, knowing of the blade concealed within it. The auction starts and Will bids $50 on Ado Annie's basket, not realizing that without the $50, he would no longer have the money her father insisted he needs to "purchase" marriage with her. Desperate to be rid of Ado Annie, the peddler bids $51 to get the basket so that Will can approach Andrew Carnes with the $50 and claim Ado Annie as his bride. The auction becomes much more serious when Laurey's basket comes up for auction. Jud has saved all his money so he can win Laurey's basket. Various men bid, trying to protect Laurey, but Jud outbids them all. Curly and Jud engage in a ferocious bidding war, and Curly sells his saddle, his horse, and even his gun to raise money. Curly outbids Jud and wins the basket. Jud discreetly tries to kill Curly with the Little Wonder, but his plan is foiled when Aunt Eller (knowing what is happening) loudly asks Curly for a dance. Later that night, Will and Annie work out their differences, as she reluctantly agrees not to flirt with other men ("All Er Nuthin'").

Jud confronts Laurey about his feelings for her. When she admits that she does not return them, he threatens her. She then fires him as her farm hand, screaming at him to get off her property. Jud furiously threatens Laurey before he departs; Laurey bursts into tears and calls for Curly. She tells him that she has fired Jud and is frightened by what Jud might do now. Curly, seeing that she has turned to him for guidance and safety, reassures her and proposes to her, and she accepts ("People Will Say We're In Love (Reprise)"). He then realizes that he must now become a farmer. Afterwards, Ali Hakim decides to leave the territory and bids Ado Annie goodbye after telling her Will is the man she should marry.

Three weeks later, Laurey and Curly are married and everyone rejoices in celebration of the territory's impending statehood ("Oklahoma!"). During the celebration, Ali Hakim returns with his new wife, Gertie, whom he unwillingly married after being threatened by her father with a shotgun. A drunken Jud reappears, harasses Laurey by kissing her and attacks Curly with a knife. As Curly dodges a blow, Jud falls on his own knife and soon dies. The wedding guests hold a makeshift trial for Curly, at Aunt Eller's urging, as the couple is due to leave for their honeymoon. The judge, Andrew Carnes, declares the verdict: "not guilty!" Curly and Laurey depart on their honeymoon in the surrey with the fringe on top ("Finale Ultimo"). 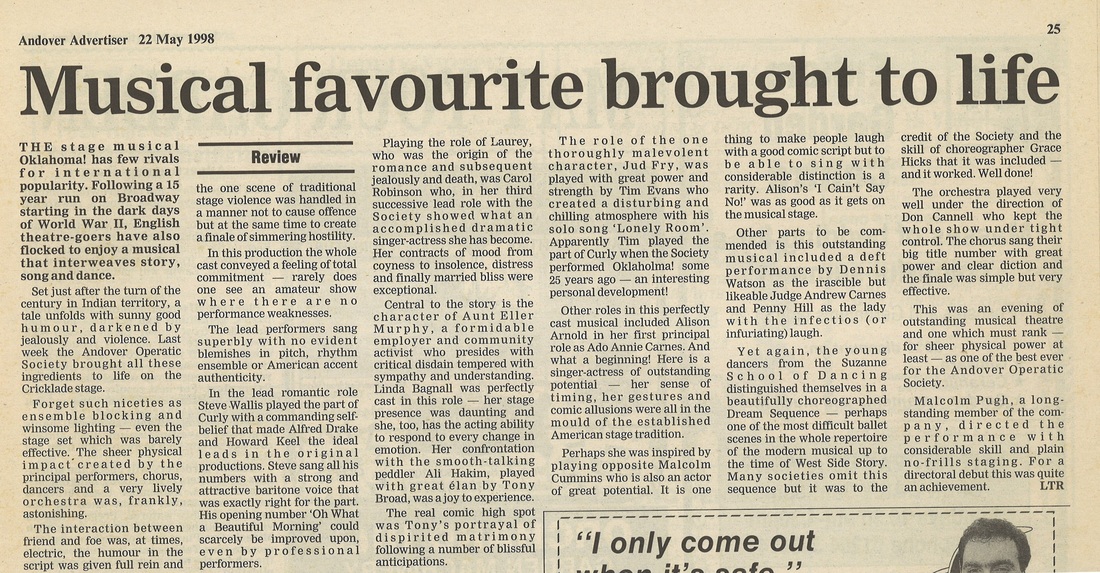 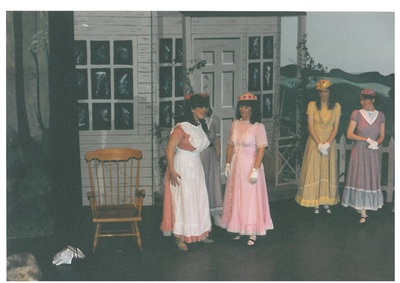 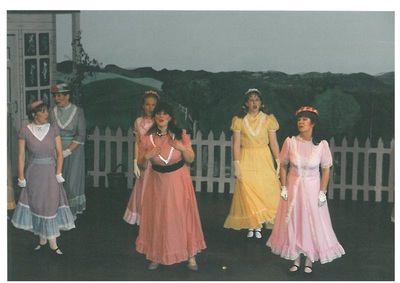 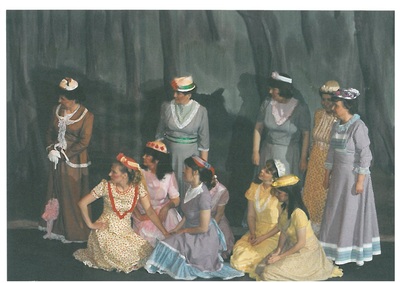 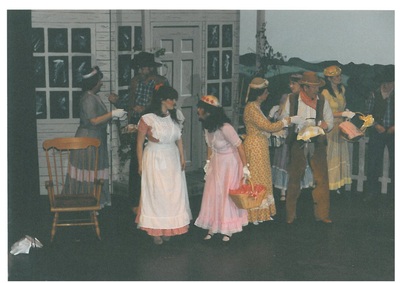 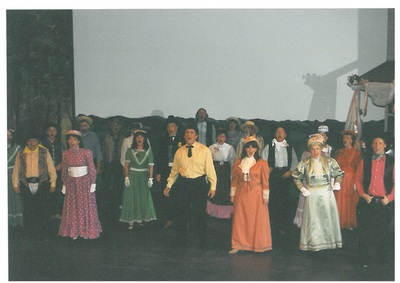 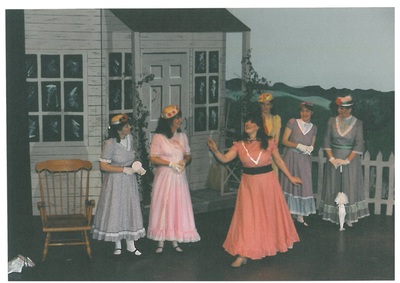 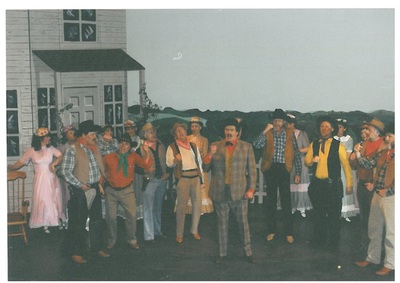 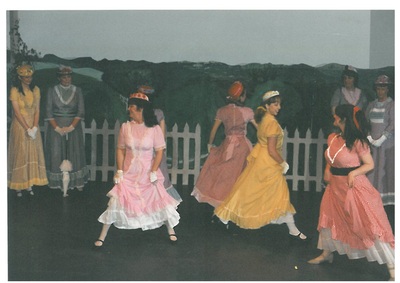 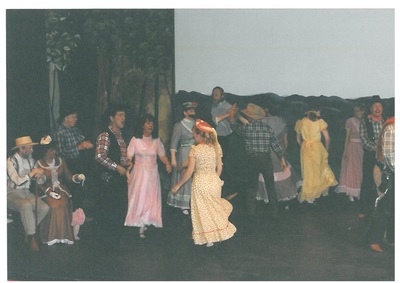 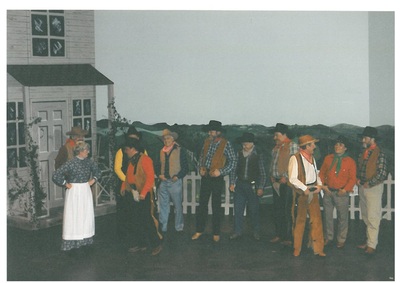 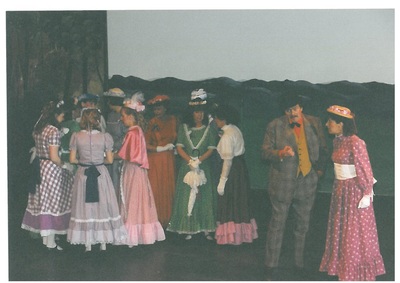 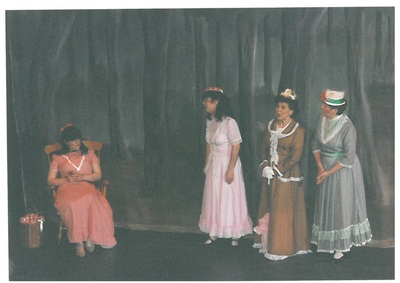 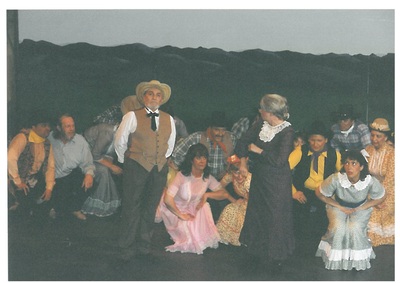 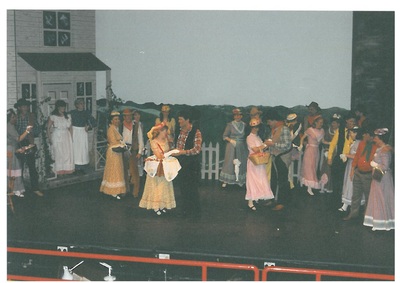 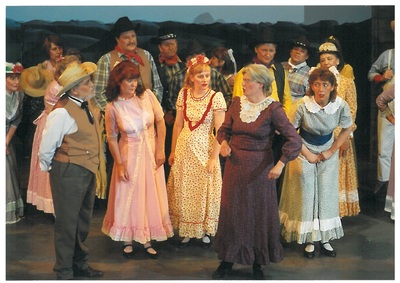 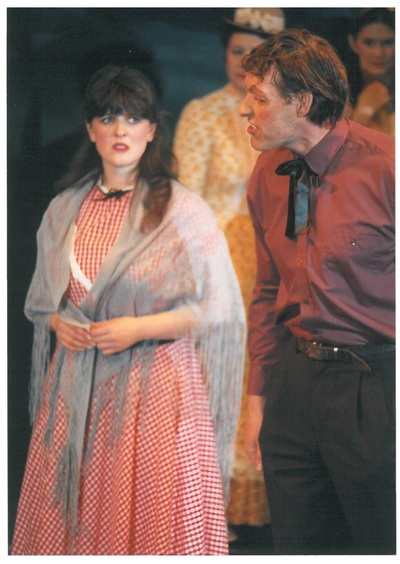 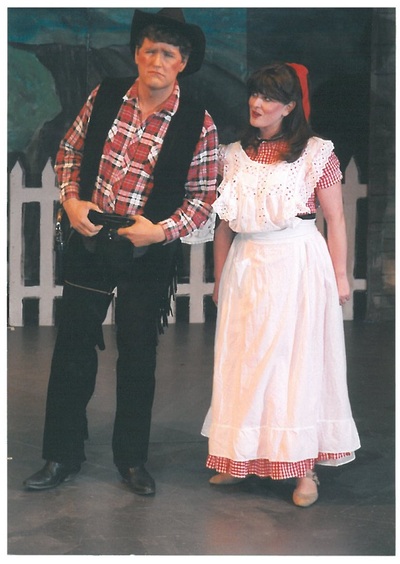 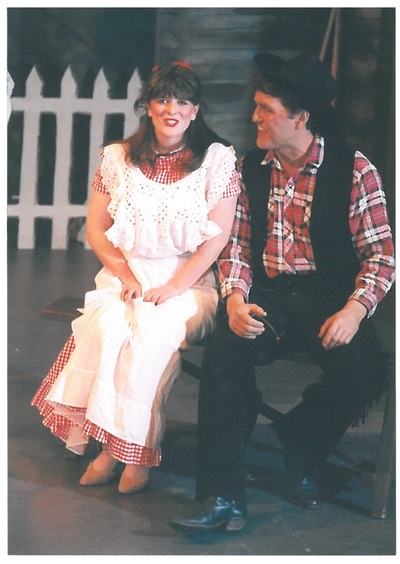 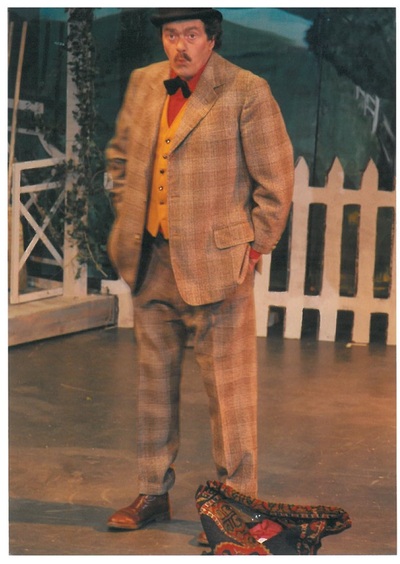