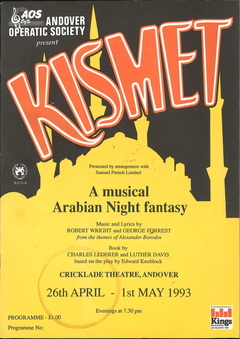 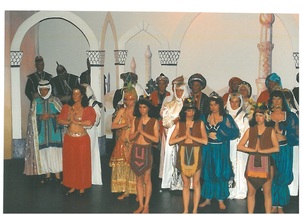 Act 1  At a mosque, an imam prays as the sun rises ("The Sands of Time"). Three beggars sit outside the temple, but the fourth, Hajj, has gone to Mecca. Crying "Rhymes! Fine Rhymes!", a poet enters to sell his verses. His beautiful daughter Marsinah joins in the sales pitch, but they have no success ("Rhymes Have I"). Marsinah is sent to steal oranges in the Bazaar for their breakfast, while her father sits down to beg. When the beggars object to the poet taking Hajj's place, he claims to be a cousin of Hajj. The poet threatens to curse those who do not give him money and soon earns a few coins ("Fate"). Hassen-Ben, a huge man from the desert, mistakes him for Hajj and kidnaps him. The poet (who is referred to as Hajj thereafter) is taken to Jawan, a notorious brigand. Fifteen years ago, the real Hajj had placed a curse on Jawan that resulted in the disappearance of the brigand's little son. Now he wants the curse removed. The new Hajj, seeing an opportunity to make some money, promises to do so for 100 gold pieces. Jawan leaves for Baghdad to search for his son, and Hajj rejoices in his new-found riches ("Fate" (reprise)).

Back in the city, the Wazir of Police comes through the busy Bazaar ("Bazaar of the Caravans"). The evil Wazir and his seductive, beautiful wife-of-wives, Lalume, discuss a loan he desperately needs. In return for the money lent from the King of Ababu, the Caliph must marry one (or all three) of the Princesses of Ababu, who perform a sexy dance. Through their amah, the princesses tell Lalume that they wish to return home. Lalume convinces them that Baghdad is much more exciting than any other place on earth ("Not Since Nineveh").

Marsinah is being pursued by a fruit merchant whose wares she has stolen. Her father arrives to rescue her, giving the man money. Hajj gives his daughter half of the money and leaves. The merchants set out their finest "Baubles, Bangles and Beads" for the young lady. The young Caliph and his advisor, Omar, have been traveling incognito. He is struck by Marsinah's beauty and follows her. Elsewhere, Hajj is basking in the glow of some scantily-dressed slave girls he has just bought, when he is stopped by the police, who are checking identities because they are looking for Jawan. The Chief recognizes, on the coins, the crest of a family Jawan has robbed and arrests Hajj as a thief. Meanwhile, Marsinah has found a quaint little house with a beautiful garden to buy for her father and herself. She is admiring the garden when the Caliph slips in and, pretending to be a gardener, introduces himself to her. They fall in love on the spot ("Stranger in Paradise"). They promise to meet again in the garden at moonrise. The Caliph tells Omar that he has fallen in love, and some policemen overhear ("He's in Love").

At the Wazir's Palace, Hajj is on trial for the theft of 100 pieces of gold. The Wazir has no need for evidence; he sentences Hajj to 20 lashes, and his right hand is to be cut off. The poet pleads that, as a poet and storyteller, the loss of a hand would cripple his career. It is the gesture that tells the story ("Gesticulate"). The lovely Lalume, attracted to the handsome poet, begs her husband for forgiveness, but the Wazir is not convinced, and Hajj gets more lashes. As Hajj curses the Wazir, a guard bursts in with news that they have captured Jawan. The old brigand is brought in and asks Hajj where his son is. He sees, around the Wazir's neck, a medallion that his son was wearing when he was captured. The Wazir is his son! Jawan praises the power of the great magician, Hajj, a man who has the power to curse and uncurse. Jawan is thrilled to see his son, but the Wazir sentences his own father to death. "For the leading judge of Mesopotamia to have as a father the leading criminal of Mesopotamia," he says, is "a disturbing thought."

As Jawan is led to his execution, the Wazir realizes that the "powerful magician" has cursed him. Just when he is about to murder Hajj, the Caliph enters with news that he has found a bride, a commoner, and that he will marry her tonight. The Wazir is distraught: if the Caliph does not marry a princess of Ababu, the Wazir will be ruined. He concludes that this is a result of Hajj's curse and begs Hajj to reverse the situation, promising him a reprieve and the title of Emir. Hajj agrees. Lalume knows that the poet is no wizard, but she decides that he may be her chance out of a dull life ("Bored") and is falling in love with him; she promises to help. When the Wazir returns, Hajj sings a mystic-sounding invocation to fate as the slave-girls dance wildly, distracting the Wazir. Hajj jumps out of a window, leaving his coat behind him. When the Wazir sees he is gone, he clutches the cloak in amazement and faints.

Act 2  The Caliph and his wedding procession approach the house of his beloved ("Night of my Nights"). Inside, Marsinah thinks only of her gardener ("Stranger in Paradise" (reprise)). Hajj enters and tells her of his situation and says that they must flee immediately to Damascus, but Marsinah refuses to go. They argue, and he nearly strikes her before he runs off, ashamed. She departs in the opposite direction. When the Caliph enters the garden, his love is not there.

The Wazir is informed by his spies that the Caliph's bride has disappeared. He rejoices at the power he wields, by having a magician as Emir ("Was I Wazir?"). He instructs Lalume to keep his new Emir happy, and she is eager to comply ("Rahadlakum"). Hajj and Lalume are discussing a trip to a "small oasis, a week's travel by camel" when Marsinah enters the Harem. Father and daughter reconcile, and she tells him of her lover and asks him to find him. At the same time, the Caliph, in the next room, orders the Wazir to find his love ("And This Is My Beloved"). Hajj and Omar encounter each other and engage in a battle of wits ("The Olive Tree").

The Wazir, hoping to convince the Caliph that only wanting one wife is just a phase, shows him his harem through a peephole where he sees Marsinah. The Caliph is horrified that his love is a member of the Wazir's Harem! The Wazir, sure that Hajj has arranged the whole thing, claims that she is one of his wives. The Caliph, heartbroken, agrees to choose his wife-of-wives that night during his diwan. So as not to have lied to his prince, the Wazir immediately marries Marsinah, promising to visit her that night. She vows to kill herself if he does.

That night, at the Caliph's diwan, the candidates for his hand dance for him: Princess Zubedya of Damascus, Princess Samaris of Bangalore, and the Three Ababu Princesses. The Caliph is unmoved. Hajj is searching for Marsinah; the Wazir thanks the "wizard" for placing the Caliph's beloved in his own harem. Laughing, he tells him that he has married the pretty little Marsinah. Realizing what has happened, Hajj pulls a knife, but has a better idea. He takes a blank plaque from his turban and throws it in a pool, proclaiming that when it is retrieved, it will read the name of the Caliph's fated bride. He secretly gives the Wazir another tablet, this one with the name Ababu written on it, and tells him to substitute it for the tablet from the pool. When the Wazir enters the pool, Hajj trips him and holds him underwater until he drowns.

Hajj explains all to the Caliph, who is joyfully reunited with Marsinah. The Caliph is ready to pardon Hajj for his murder of a public official, but the poet requests, as his punishment, to be "banished to some dreadful oasis ... at least a week's journey away by camel," and to be made to comfort the Wazir's widow in her "grief". As the two couples unite, the poet reflects on the fleetingness of "The Sands of Time". 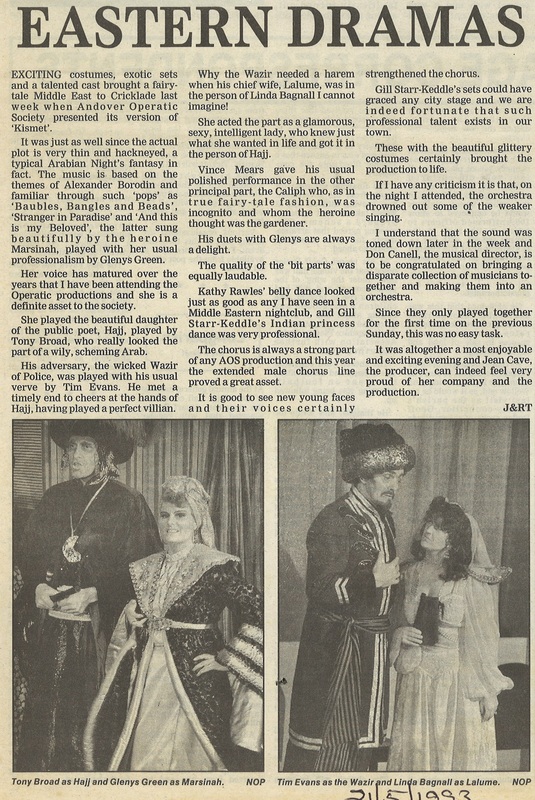 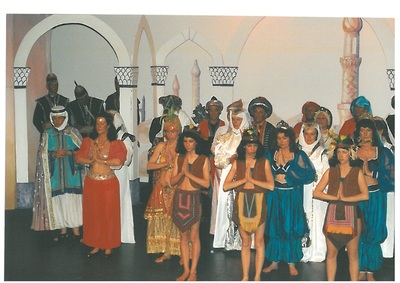 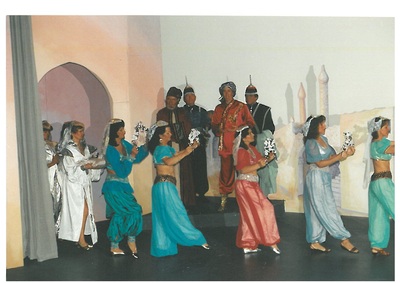 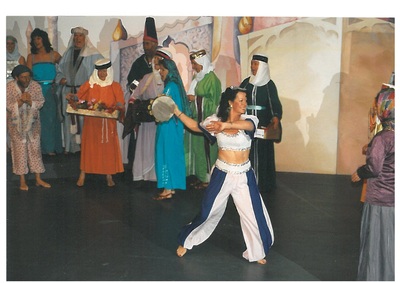 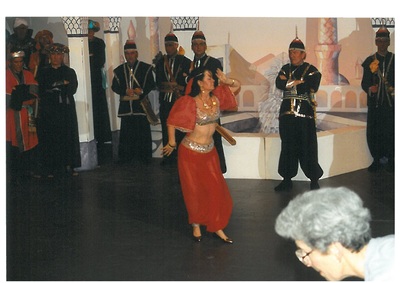